Nestled in the mountains of Piedmont, in the most northerly reaches of Italy, is the small village of Gurro. Today it is home to around 300 people. But for all it might appear a typical village of its type, Gurro has a remarkable story behind it: it is said to have been founded by Scottish soldiers.

The traditional story has its roots in 1525, when the region was being criss-crossed by the hostile armies of France and the Holy Roman Empire. King Francis I of France was besieging Pavia in a conflict which would determine which of the two great powers would dominate the politics of northern Italy, which at that time was a series of city-states rather than a unified nation. On 24th February an Imperial army attacked the king’s forces, and the ensuing battle lasted four hours – no short time for the 50,000 or so combatants. The French army was decisively beaten, breaking up as it endured perhaps 15,000 casualties and prisoners. Even the king himself was captured, and the shattered remnants of the army dispersed in search of safety. 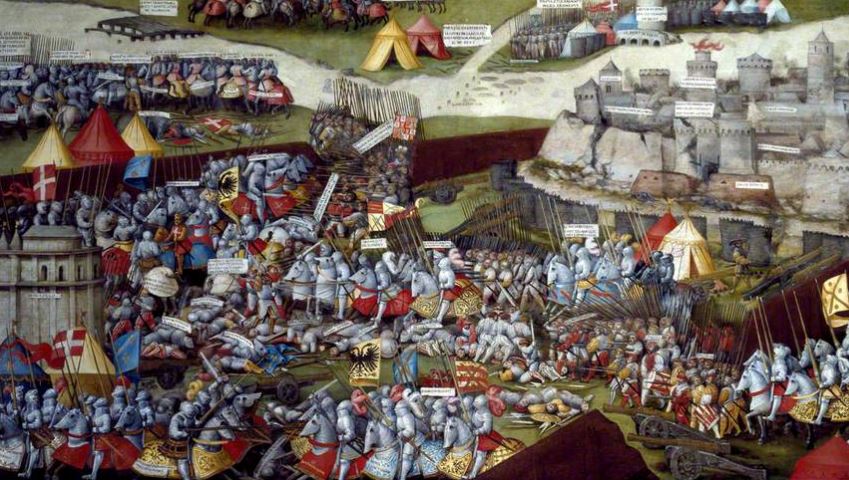 Amongst the French king’s forces, and not unusually for the time, there was a contingent of Scottish soldiers – archers according to some sources. Those who survived the battle began their desperate march back to France in the appalling conditions of an Alpine winter. When the blizzards became too much to endure and the passes became blocked, the Scots huddled for shelter in a small village. There, dispirited and defeated, exhausted from their toils and conscious of the collapse of the French campaign, they decided to abandon thoughts of France and settle where they were. They rested in the village of Gurro, and they never left. And so, the tradition goes, many of the modern inhabitants of Gurro can trace their ancestry back to Scotland. Names like Donaldi appear in the parish archives – descendants of Macdonalds.

A few days ago we were contacted by Sylvia Howard, who had read about the Diaspora Tapestry in Scots Magazine. Her mind instantly leapt back a few years to her visit to a remote Italian village where she had been surprised to discover not only a Scottish museum (below left), but even a “Bar Scotch” (below right)! We had already come across the story of Gurro, but were delighted that Sylvia was able to provide us with some photographs of her visit.

Since we in Scotland have had a little snow in our lives over the past few weeks, we thought we would share the story of those unfortunate Scottish soldiers and their wearying escape… and appreciate how much worse things could be!