Still looking for a Merseyside Exhibition venue. Any volunteers?

If only those TBC dates for Merseyside could be agreed, and a venue, all would be better!

We’ve still not finalised a Merseyside Exhibition so the stitchers from there in England have to make journeys far and wide
to see their finished panels …. any volunteers?

One destination has been The Garioch Heritage Centre at Inverurie which is currently hosting The Scottish Diaspora Tapestry until November 11th.
Several stitchers who helped create it have made the journey to Inverurie to view their handiwork in the Centre, but none have come as far as
Colin and Sandra Spence [367.4 x 2 miles via M6], who made the trip up north from Birkenhead to see their panel.

It’s just besides them in the photograph, the Cammell Laird panel [GBE13]. They worked on it as members of the
Liverpool & District St Andrew’s Society with Muriel Forrest of St Helens and District Caledonian Association.

Alan Harrow of the Garioch Heritage Centre said: “This has been a wonderful opportunity for Inverurie. To host such a wonderful
exhibition in this space has been a real privilege and meeting some of those who worked on the tapestry just adds
to the special feeling this exhibition has generated.” 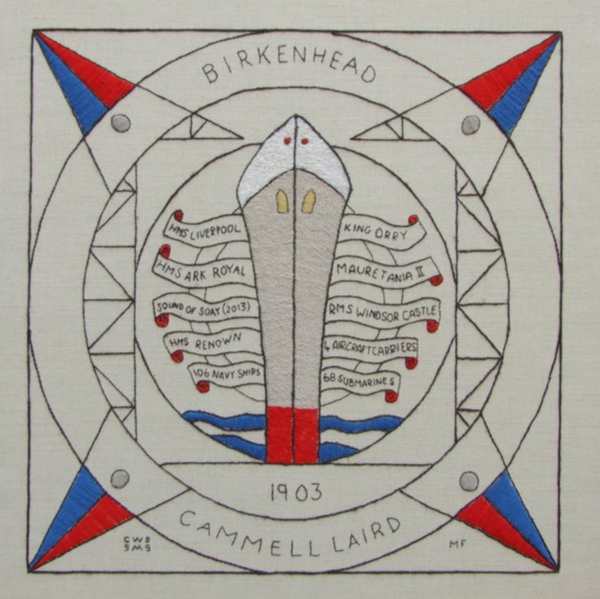 As his father had, John Laird brought his sons into the business as partners. After his death in 1874 they continued to run the company,
and in 1903 they merged with the Sheffield-based Johnson Cammell & Co which made vehicles for the London Underground.
The Cammell Laird shipyard continued to produce high quality ships, including building for the Royal Navy warships, aircraft carriers like the
massive HMS Ark Royal, and submarines. The yard was nationalised in 1977, returning as part of Vickers. In July 2013 the
Cammell Laird yard launched the Sound of Soay, the first ship to be completed there for 20 years.