01-Jun-2016 The Tapestry has made its much anticipated landfall in Canada, where it visits Victoria in British Columbia [formerly New Caledonia!] 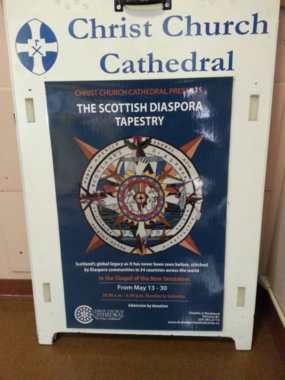 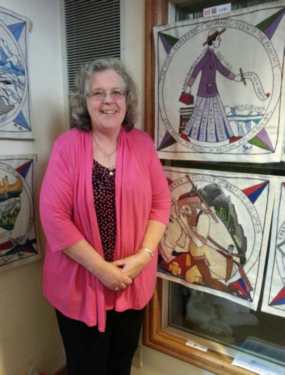 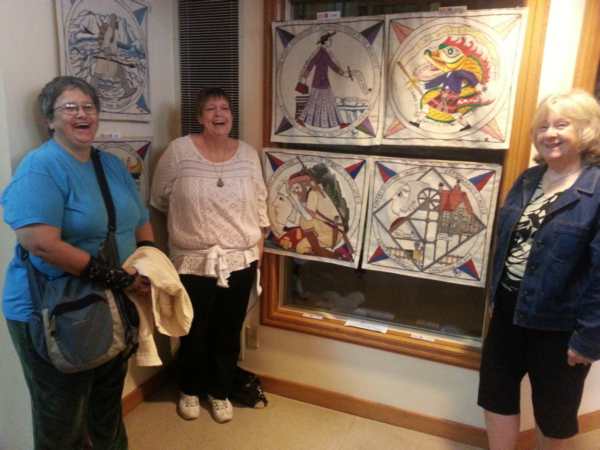 It is being displayed in the Chapel of the New Jerusalem at the cathedral, using aluminium foil boards for the first time with some intriguing acoustic implications. 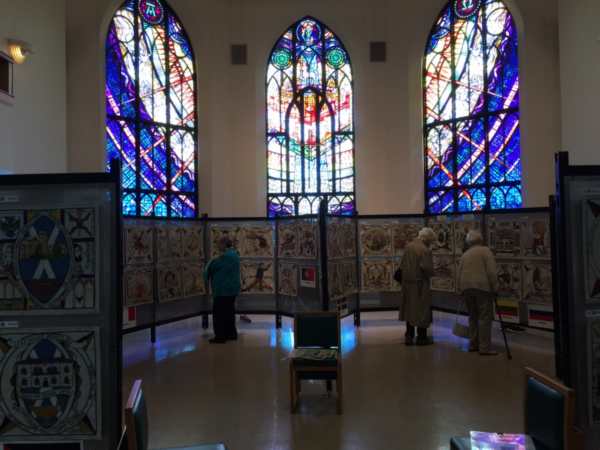 It moves to Winnipeg in June, including Canada Day there, and then briefly to the US in Marquette County before returning across the Border to Scarborough/ Toronto, Charlottetown Prince Edward Island, New Glasgow Nova Scotia and finally for St Andrew’s day Montreal in Quebec. At each location, stitchers who helped create this extraordinary artwork in 2012/ 2014 will be on hand to help with staffing/ guiding and sharing the whole world’s contributions with family and friends. Also in support is David Maclean, Baron of Prestonpans, who is Professor of Medicine at the University of British Columbia at Vancouver. 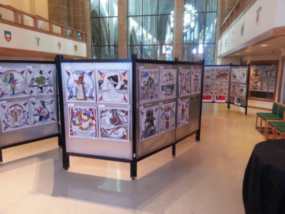 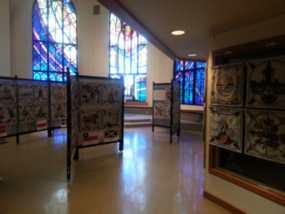 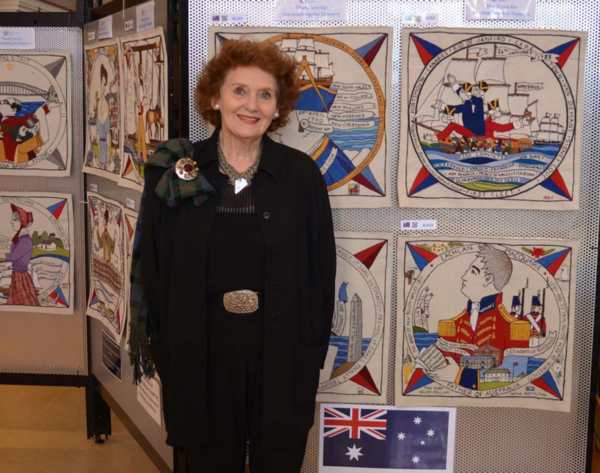 P.S. Although Jenny Bruce, Tour Director, is seen above standing next to the Australian flag and panels, she is very much on the ground in Victoria BC. She flies home to Scotland early June and returns to take charge again in Scarborough/ Toronto in September.

Educator, writer, lecturer, and adventurer, Agnes Deans Cameron was born in Victoria, British Columbia, in 1863, to Scottish parents. She graduated from Victoria High School and began teaching school in Victoria at age 16. During a long career in Victoria, Comox and Vancouver, she was BC’s first female high school teacher (1890) and first female principal (1894). At the same time she pursued a part-time career as a journalist. When her teaching career ended in 1906, she supported herself through writing. In 1908 she travelled down the Mackenzie River to the Arctic chronicling the trip in her book The New North. In 1910 she did a lecture tour of Britain to promote emigration to Canada. She died in 1912, one of the most famous writers in the country.

The Hudson’s Bay Company began recruiting miners from Ayrshire, Scotland, to help develop a mine at Fort Rupert on northern Vancouver Island. The first contingent arrived at Fort Victoria aboard the Harpooner on June 1, 1849. They were the John Muir and John McGregor families from Kilmarnock. The next group was the Boyd Gilmour and Robert Dunsmuir families, also from Kilmarnock. The miners had signed a contract with the HBC for three to five years. All were transferred in 1852 from Fort Rupert when the new coal deposit was discovered at Nanaimo. Robert Dunsmuir renewed his contract with the HBC and in 1855 he and Edward Walker were granted the first free miners’ licenses. He then reopened a mine on Commercial Inlet, hired his own workers and sold the coal back to the HBC. A coal-prospecting trip in October 1869 changed his life forever; he found a seam of coal that would bring him riches beyond his dreams. With capital from friends in the navy, he formed his own company and began transporting coal to San Francisco.

When British Columbia entered Confederation of Canada in 1871, British Columbia was promised a railway on Vancouver Island. In anticipation of this, the BC government established a railway land reserve 20 miles in width along the east coast of the island. Dunsmuir formed the Esquimalt & Nanaimo Railway Company (E & N Railway) and petitioned the government to construct the railway. All the railway land reserve was transferred to Dunsmuir. His consortium also received $750,000 bonus to help with construction. Construction began in 1884 and the railway was completed from Victoria to Nanaimo in 1886. He was now the richest man in British Columbia. Craigdarroch Castle was built, named after the home of Annie Laurie, a song made famous by Rabbie Burns. His wife Joan was firmly established in Craigdarroch Castle when their son James built his own Hatley Castle in 1908. James had become Premier of British Columbia in 1900.