Barga exemplifies the reverse diaspora of migrants to Scotland. Spurred on by extreme poverty brought about after the Unification of Italy in 1861 (now celebrated on 17th March), Barghigiani began to migrate. Special privileges such as exemption from salt taxes and the preparation of silk for Florentine trade had ceased and farmland was often insufficient to support large families.

Two banners in the offices of the Mayor of Barga, exemplify the change in status of Barga from a commercial centre with affiliation to Florence, to economic decline as part of the Italian State. The earlier silk banner dating from the early to mid 1800s shows a simple boat with tree mast and a Florentine emblem in the top left corner. On the later banner, made after 1861, the emblem is no longer represented. The ‘tree’ mast represents the Barga patron saint, St Christopher (San Cristoforo), who is also the patron saint of travellers. Barga is a mountain top city, but has an image of a boat at the centre of its coat of arms. According to Professor Sefano Borsi (Barga News 30 May 2009), the Longobard arrival in the 6th century AD was the founding of Barga. The name is derived from a word referring to a group of dwellings. A similar Italian word ‘Barca’ that means double-ended boat in Italian was probably confused with the early Germanic word. A sliver of Christ’s cross fell to the ground and grew into an oak. It uprooted itself, went across the Mediterranean on a boat to Tuscany, transformed into a statue of St Christopher and went to the top of the hill where the Duomo is today. 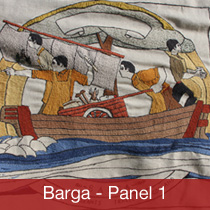 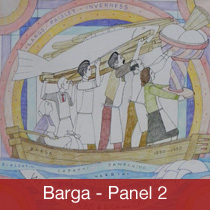 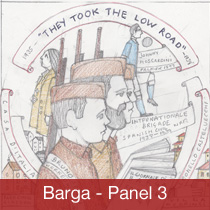 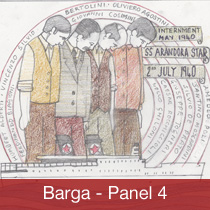 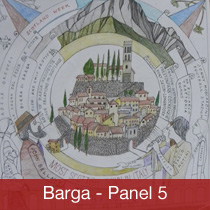