Icelandic Sagas retold from The Books of Settlements

The Scottish Diaspora Tapestry has received a most extraordinary and beautiful gift from tapestry stitchers in Iceland. Inspired by our 305 metre tapestry, which was exhibited in Eyjafjardazsveit, Nordland en route back from Canada in February 2017.  Icelandic stitchers have created 5 Panels and donated them to us to be exhibited as may be possible in the years ahead – the first in Prestonpans. The Presentation takes place in the Scottish Parliament on June 3rd 2019 at 6pm with many of those involved present. The five Panels are all drawn from The Book of Settlements and the tale behind each is given below.

Main Sponsors of the artwork were Helga Steinunn Gudmundsdottir, The Cultural Committee, Akureyri, Bryndis Simonardottir. Historical adviser on Aud the Deep and his sister Thorrun was Vilborg Davidsdottir.

The Panels were designed by Kristin Ragna Gunnarsdottir, an artist and art teacher at the Reykjarvik Art University; Bryndis Simonardottir, a handicraft artist and family therapist was the instigator and coordinator of the artwork.

The panels will be exhibited in Prestonpans at The Prestoungrange Gothenburg later in June.

Two examples, Panels 2 and 4 are shown below as a foretaste. 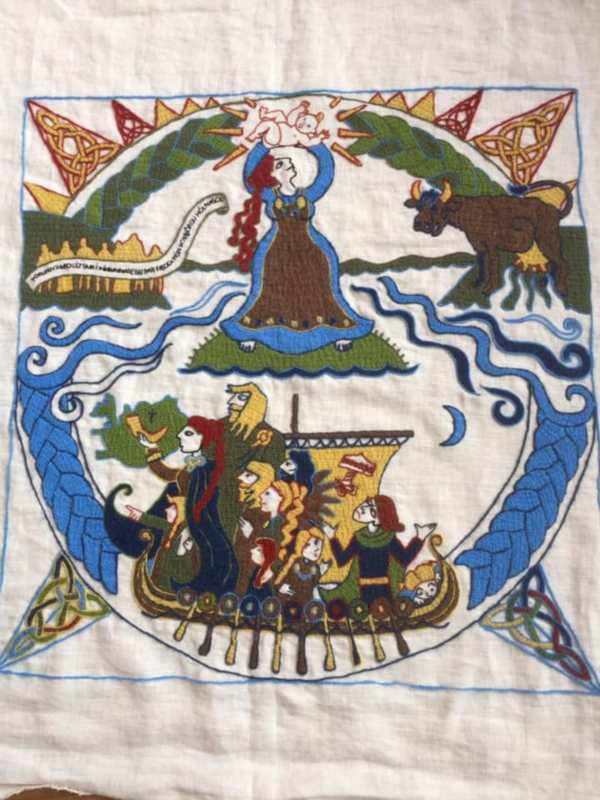 PANEL 2 Helgi the Lean was the son of Eyvindur the Easterner and Rafarta [Rabhartach], daughter of Kjarval [Cerbal], king of the Irish. He was sent to be fostered in the Hebrides when he was young. He married Thórunn, daughter of Ketill the Flatnose.

They went to Iceland with their children Ingunn, Hrólfur, Ingjaldur, Helga, Hlíf, Thórhildur and Thóra. With them came also their son-in-law, Hámundur heljarskinn [Dark-Skinned], who was married to Ingunn. Helgi was very shifty in his faith. He believed in Christ, but made vows to Thor for sea-faring and hardy deeds. When Helgi sighted Iceland, he inquired of Thor where he should make land and the oracle directed him northward round the land. Hrólfur, his son, then asked whether Helgi must hold into Dumbshaf [lit. Foggy Sea] if Thor should direct him thither, as the crew thought that now it was high time to leave the sea, because the summer was in a great measure spent.

Helgi settled the whole of Eyjafjördur between Siglunes og Reynisnes and made a great fire at every river mouth and thus hallowed to himself the whole district. He wintered at Bíldsá River but in the spring, he moved to Kristnes [Christ’s Ness]. During the move of his household Thórunn gave birth on Thórunn’s Holm in Eyjarfjardará River, to Thorbjörg Hólmasól [Sun-of-the-Holm]. Helgi believed in Christ and therefore gave his name to his dwelling. 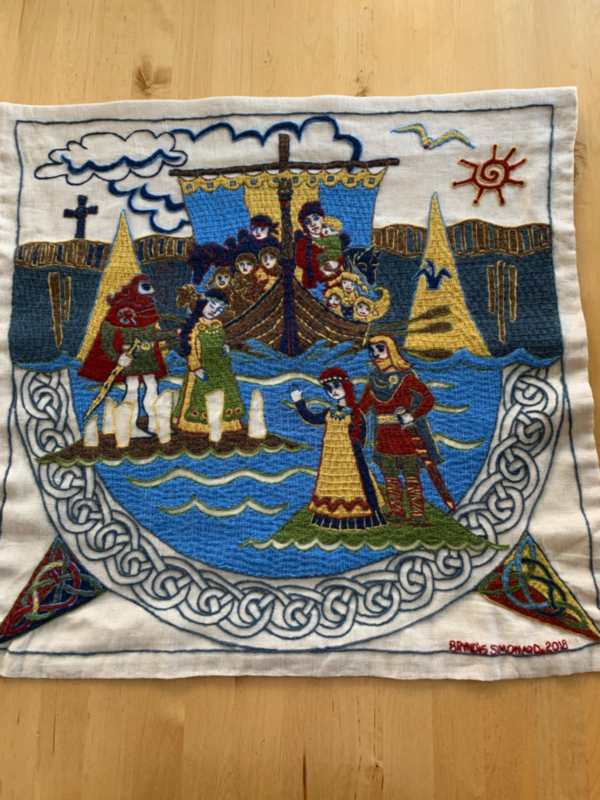 PANEL 4 Audur the Deepminded went to the Orkney Islands and there she gave away in marriage her granddaughter Gróa, daughter of Thorsteinn the Red, to Dungaður [Donnchadh/Duncan], Earl of Caithness. Groa was the mother of Grélöd [Gléflaith], wife of Thorfinnur Skull-Splitter, Earl of Orkney and from them descend all the earls of Orkney.

Erpur [Pictish: Erp] was a freedman of Audur’s, son of Meldún [Máel-Dúin], earl of Scotland, who was killed by Earl Sigurdur of Orkney. Erpur’s mother was Myrgjol [Muirgeal], daughter of Gljómall [Gléomál], king of the Irish. Sigurdur took them captive in war and made them suffer. Myrgjol was a servant to the earl’s lady. Audur bought her for a high price and promised her freedom if she would serve Thuridur, wife of Thorsteinn the Red, as she had become the queen. Myrgjol and Erpur then went to Iceland with Audur.

Next, she sailed her ship to the Faroe Islands and there, she gave Ólöf, daughter of Thorsteinn, in marriage. From there, the most noble family of that land is descended, called the Götuskeggjar [People of Gata in the isle of Eysturoy]. Now, Audur left the Faroe Islands, heading to Iceland. She came ashore at Vikrarskeid in the South and was shipwrecked there. All her men were saved, and her goods also.