We have been taught that the original settlement in The Pans was by a Viking warrior who came well before the 12th century. The monks of Newbattle Abbey, granted the lands in 1189, found that earlier community then known as Aldhammer already established. The late Andrew Hillhouse, whose many artworks include the Battle of Prestonpans Collection, captured that Viking arrival in a magnificent longship passing Bass Rock. 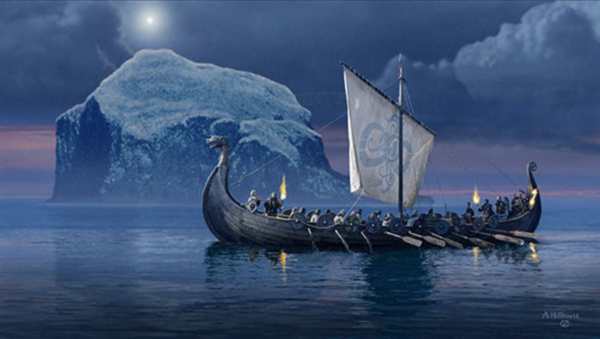 The question was triggered in the splendour of the Robert Burns Room at the Scottish Parliament on June 3rd by the gift from Icelandic embroiderers of five additional panels for the Scottish Diaspora Tapestry. Despite all ‘practical’ assertions that diaspora story telling through our tapestry was necessarily concluded in 2014, the descendants of Herbridean Aud the Deep Minded brooked no exclusion. Legend tells of her achievements as a remarkably determined grandmother! On behalf of the Diaspora Trust Gordon Prestoungrange, Chairman, and Yvonne Murphy, Lead Stitcher, were there to say Þakka þér fyrir, Thank You, and promise to display these new panels in the years ahead. This is the story they tell.

Aud was the granddaughter of a Viking Chief Born from Sogn in Norway. Her father, Ketill Flatnose, and mother Yngvildur, had been exiled and settled in the Hebrides where she married Olafur the White, The Greatest King of the Western Seas including King of Dublin, with whom she then settled in Caithness. When Olafur was later killed in battle back in Ireland his son Thornstein the Red was made King of Caithness, Sutherland, Ross and Murray. When he was betrayed and in turn died in battle Aud resolved to emigrate to Iceland, building a large Knaar oak boat in woods in Caithness. It was large enough to take her family, servants, animals and many possessions. Their first port of call was in the Orkneys where granddaughter Goa married Duncan, Earl of Caithness. Next in the Faroes her granddaughter Olof married local nobility. Eventually she was safely shipwrecked in south west Iceland subsequently settling at Hvammur, freeing all her servants and crew with gifts of land still bearing their names to this day. As a Christian she oversaw the erection of many crosses locally although Iceland had not yet become a Christian nation. In old age she called a great three day feast of all her kinsfolk that was to be her funeral Wake and she elected to die and be buried on the seashore between high and low tide so as not to be interred on unconsecrated land – this final act so beautifully depicted in Panel 5 stitched by Anna Gudmundsdottir [below]. 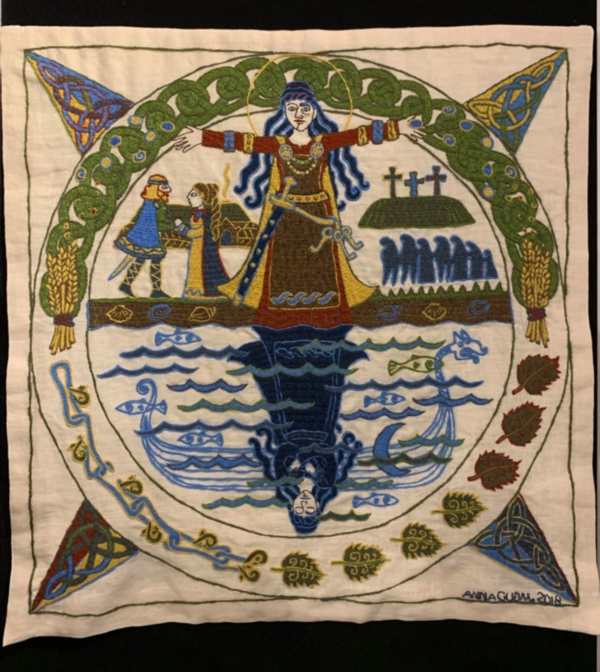