This Panel 27 shows Sister Edith Popplewell who was in charge of a 24 bed ward at Mount Felix, one of 44 created from The Riverhouse Barn at Walton-on-Thames which is where Mount Felix served as a Hospital in WW1 for wounded New Zealand soldiers returning from Gallipoli and the Western Front. It’s HERE on exhibition!

The idea for such a Kiwi tapestry came from a visit to The Prestonpans Tapestry by Emily Boulting, Director in Walton-on-Thames and her subsequent meeting with Andrew Crummy who designed it for them. The famous Damascene moment for Sandy MacCall-Smith when he saw the Prestonpans Tapestry at Edinburgh’s Dovecote and was inspired to get Andrew to design the Great History of Scotland Tapestry often overshadows what went along in Walton-on-Thames. But it should not! Both are extraordinary examples of how our own Prestonpans ‘community art tapestry’, itself inspired by The Bayeux, triggered a still continuing renaissance of such artworks kingdomwide. As we write the Pinkie Cleugh 1547 Heritage Group is stitching its own tapestry close by in Musselburgh also designed by Andrew Crummy ….

Our connection from The Pans goes further however. As Emily and her local embroiderers got started The Prestonpans Tapestry was invited to exhibit in Walton-on-Thames as a modest motivator, proof it could be done. That Exhibition is shown HERE

And furthermore, after its Official Unveiling with the NZ High Commissioner and all the dignitaries imaginable, Riverhouse Barn resolved that it must tour New Zealand just as we have taken our tapestries back across th globe to the stories they recount. The Mount Felix Tapestry has just got back after an 18 month, 8 stop tour ……. and this exhibition is its first viewing since then.

Those involved in other tapestries wont be surprised to learn that 44 panels will soon be 46. Two unstoppable stories emerged during the tour that will join those original tales ….

It’s a masterpiece and along with its accompanying book tells extraordinary tales ……. with three love stories … 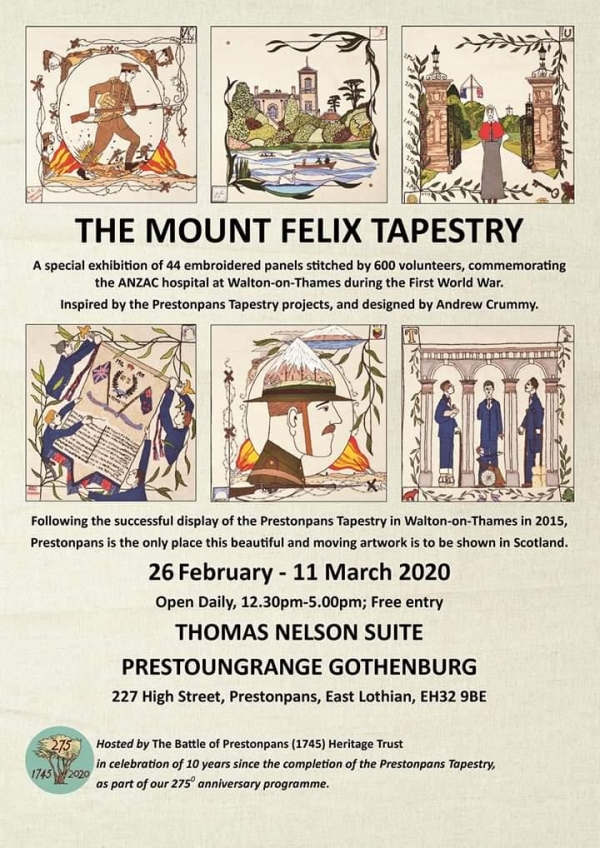 Opening Times are 12.30/ 5pm daily February 26th/ March 11th, Entrance Free … but it’s a fascinating moment to ponder, on our 10th Anniversary, just how far our initiatives back in 2010 have travelled. 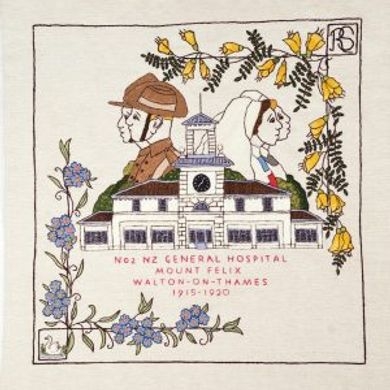