From Chatham-Kent Ontario, Canada, came details of a completed new ‘own initiative’ panel from Carolyn Beacroft telling of the fate and development of the 5th Lord Selkirk’s
Baldoon Settlement. The ship in which they sailed from Kirkcudbright to Newfoundland then up the St Lawrence, the Oughton, the sheep they brought and the
mosquitos that killed seven of them on their unexpectedly marshy lands are all captured on the embroidered panel. Leaving the marshlands they went on to found
Wallaceburg on higher ground nearby on the banks of the Sydenham River.

Here’s the new panel from the Selkirk Settlers in Wallaceburg, Ontario as told by Carolyn who got her local stitchers in the Tulip Tree Needlearts Guild to work to Katherine McFadden Stinson’s design
and this fine jpeg’s just arrived so here it is. 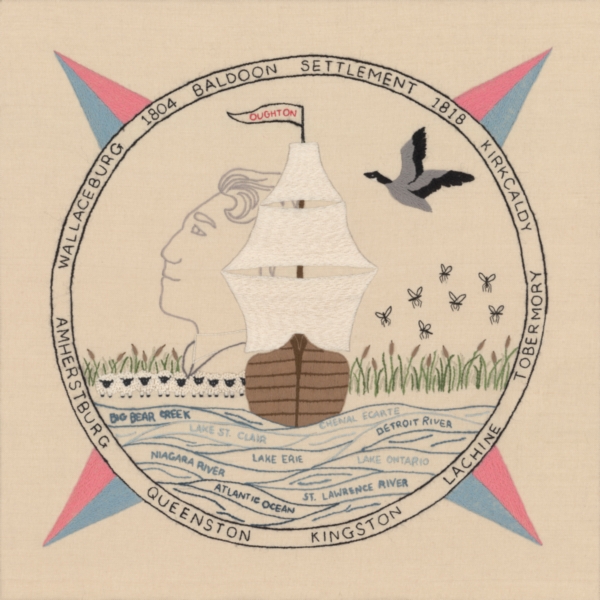 The full explanation is summarised here – the gentleman pictured is the optimistic Lord Selkirk with high hopes for a prosperous settlement; the ship pictured is the
Oughton that carried the settlers; Kirkcaldy, Tobermory, Lachine, Kingston, Queenston, Amherstburg, Wallaceburg indicate the departing landmarks and stops
along the way; Atlantic Ocean, St. Lawrence River, Niagara River, Lake Ontario, Lake Erie, Detroit River, Lake St. Clair, Big Bear Creek and Chenal Ecarte are the
waterways travelled by the settlers; the primary industry of the settlers was to be sheep farming but that did not prosper on the marshy habitat; cattails represent
the marshy landscape that proved to be a breeding ground for mosquitoes with seven representing the seven heads of families that died of malaria; finally the
black goose is a symbol of the Baldoon Mystery [?] – you’ll need to google that!

The Scottish Diaspora Tapestry continues to attract over 3000 visitors every week at our website.
… amongst these this week came a fresh tale from Ann Murton, male line descendant of Donald Macpherson, an agriculturalist. Donald’s daughter begat two famous sons Sir Ross and Sir Keith Smith.
Donald helped open up lower northern parts of WA from 1835 establishing cattle and sheep breeding properties. Donald and his brother Duncan ran the telegraph office
and post offices from their properties and took in travellers on the way up north, Duncan supplying horses and lodgings for expeditions.
Those two famous sons were WWI pilots [one RFC one RAF as in uniforms below] who took up the challenge in 1919 from the Australian government of a prize of £A10,000 for
the first Australians in a British aircraft to fly from Great Britain to Australia. On 12 November 1919, the brothers, along with Sergeant Jim Bennett and Sergeant Wally Shiers,
departed from Hounslow Heath Aerodrome, England, in a Vickers Vimy aeroplane eventually landing in Darwin, Australia on 10 December, having taken less than 28 days
with an actual flying time of 135 hours. The four men shared the £10,000 prize money and Keith and Ross Smith were immediately knighted while Sgts. Shiers and Bennett were
commissioned and each awarded a Bar to their Air Force Medals. 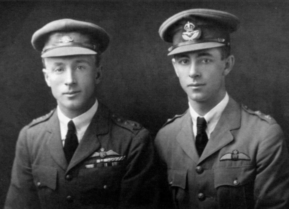