Baldoon-Wallaceburg Stitchers to exhibit ‘their’ panel + 37 more from across Canada.

Lord Selkirk had hoped a new settlement could be created in Baldoon in 1804/ 1818 but the land proved too marshy so the settlers moved to higher ground to found Wallaceburg. Learning of the Scottish Diaspora Tapestry’s tales of settlement in Canada, the local Tulip Tree Needlarts Guild led by Carolyn Beacroft and Katherine McFadden designed and stitched their own. We knew nothing of this in Prestonpans until they contacted us with the finished artwork telling their story. 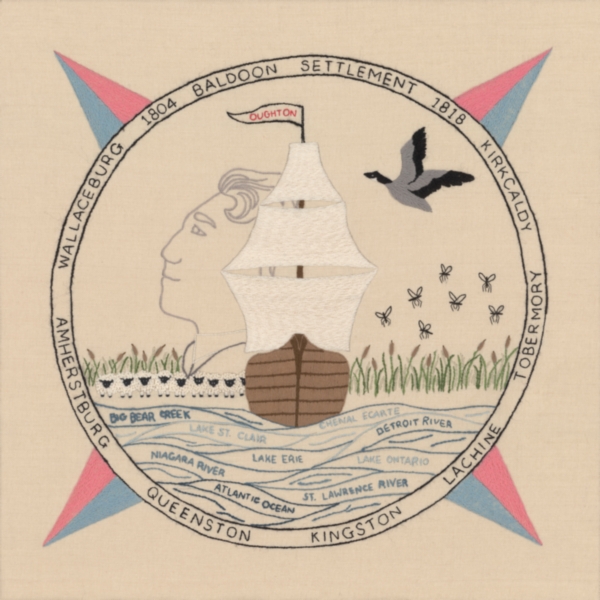 A decision had to be made on what to do with their beautiful, unexpected panel which they offered to join our existing collection. That will of course be much appreciated but surely before it travels to Scotland to join the existing 350+ we could arrange a full exhibition there with the 37 earlier completed Canadian panels. After all, the Tapestry has a habit of travelling across the Diaspora! And so it has transpired.

Wallaceburg is part of the municipality of Kent-Chatham in Ontario and their exhibition facilities will be available for 3 weeks after Canadian Thanksgiving, October 11th 2021 – thanks to support from Heather Slater, Municipal Manager of Arts & Culture. The deal is as ever – we ship the panels in and they ship them back!

The Baldoon Panel, now registered as CA38, shows the names and places the settlers visited on their journey to Baldoon and at the centre the ship that carried them, Oughton, sits on waves that name each waterway travelled. Lord Selkirk looks out to the left across his vision of sheep, grasslands and a small marsh to provide game for tenants. To the right is a large marsh with mosquitoes flying above that represent the seven early settlers who died of malaria. Above the marsh flies a goose as the folklore symbol of the baffling events of the early settlement. The initial history was of course a disaster but it was overcome by the settlers move to higher ground at Wallaceburg.