There had to be a last panel arriving ..and it depicts Maine …

… but it was of course always going to be well worth the wait. Sharon Beck back at Gullane in Scotland was able to finally complete the artwork begun in the US seven years ago.
Those who have a copy of the 2nd Edition of The Official Guide will know that more than a few panels had not actually arrived home in Scotland, stretched and photographed, as that book went to press in 2015 for Veere’s Magnificent Grand Launch in The Netherlands. And six new unsolicited, completely stitched and gladly welcomed panels [5 from Iceland and 1 from Baldoon Ontario]  arrived taking the total to 311 before US05 came home … but all is forgiven and Sharon Beck is greatly to be thanked! Rest assured all will be in the 3rd Edition due later this year. 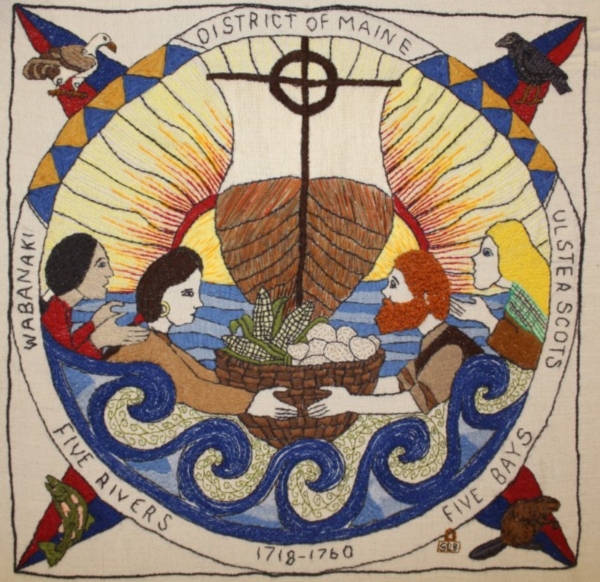 From 1718 to 1760 over 300 communities along the coast of Maine were settled with ‘Ulster Scots’. Although the history of relations between European settlers and First Nations sometimes resulted in tragedy, though misunderstanding and exploitation, the historic and cultural similarities that the two groups shared have helped foster understanding and a willingness to co-operate. Both were tribal: valuing family relationships, supporting members of the clan or village, fostering children to build allegiances and honouring elders. Resourcefulness, resilience (symbolise by the beaver), independence, loyalty, courage and humour are all qualities that the two groups hold in common.