The Battle of Prestonpans Tapestry visits Corby to ignite enthusiasm for the Diaspora Tapestry!

As promised, the Battle of Prestonpans Tapestry outstripped Bonnie Prince Charlie in 1745 by pressing as far south as Corby this week, where it was eagerly hosted by the Grampian Club. It was no easy operation - with setup beginning at 7am on a Sunday morning - but the warm reception of the visitors soon made up for the early start! Pictured here are our own Gordon Prestoungrange with Corby's personification of its Scottish links, John Douglas.

It proved to be a wonderful opportunity to celebrate Corby's famous Scottish links, not least because it coincided with the club's St Andrew's Night excitements...

But the Battle Tapestry was there with a dual purpose of course: we wanted to whet the appetites of the Corby Scots for telling their story in tapestry. Regular readers will know that we've been courting Corby for some time now, and we're delighted that the storylines for its panels are more than emergent. One local newspaper summarised the connections as Pipers, Pipelines and Porridge! The current plan is for panels centred on the following:

Research is continuing, especially for those all important images which will inspire the artist, and Peter Hill and Billy Dalziel must be thanked for their continuing assistance.


Meanwhile, progress continues further afield. Artist Andrew Crummy is hard at work designing panels showing the story of Scots in Prince Edward Island, whilst Gillian Hart and Yvonne Murphy are currently on field visits to France (to meet the Edinburgh University Alumni group there) and the Netherlands. All the latest news will be reported on their return... 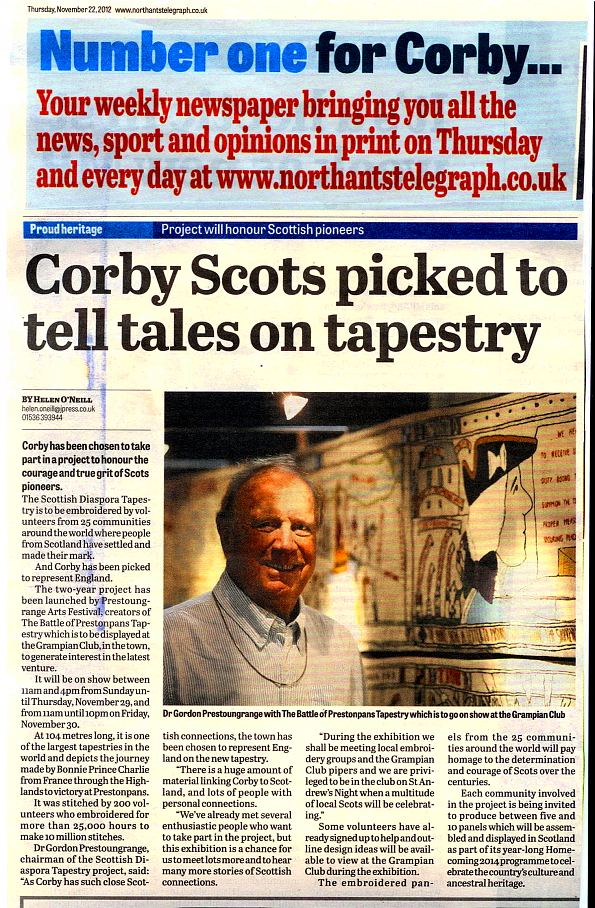