The Battle of Prestonpans Tapestry is an extraordinary 104-metre artwork, embroidered by 200 volunteers from around Scotland. It shows the early part of the Jacobite campaign of 1745 and was inspired by the Norman Bayeux Tapestry.

Since its completion in 2010 it has attracted thousands of visitors as it tours the country. Its enourmous success is due to the passion of the volunteers who created it, the astonishing quality of the artwork and embroidery, and fascinating history it depicts. 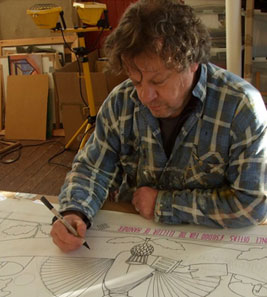 Now that skill and enthusiasm is set to move to an international stage. The same artist, Andrew Crummy, will provide the outline designs, and the same administrators and switchers will manage the project.

The 2014 Year of Homecoming provides the perfect arena for the assembly of the tapestry, with representatives from each community accompanying their panels to Scotland for an extensive programme of events and celebrations.

Enthusiasm for embroidery is universal and this project provides an opportunity for people of all ages and abilities to get involved. The Battle of Prestonpans Tapestry attracted an army of willing volunteers and has proved that this combination of crafts and heritage is highly successful, both with participants and audiences.

The full story of how this second major tapestry was conceived in Prestonpans is described in more detail HERE.

Recruiting Participants:
By early 2012 the 25 communities were identified, chosen to provide a representative and interesting spread of Diaspora tales. Volunteers within the communities will be recruited and their version of their Scottish links documented. Each community will be invited to produce between five and ten panels, each measuring 50cm x 50cm.

Many diaspora communities have connections to a particular area of Scotland, and they will be encouraged to become involved in the project. They can help research the links and families who emigrated, produce their own artwork, involve local schools and groups and host the completed tapestry in 2014.

Schools will be encouraged to contribute to the Diaspora Tapestry website, sharing their research with other schools and communities, and to get involved in the Homecoming of the tapestry in 2014. Together with their wider community, they will be able to host events and stage performances to celebrate their section of tapestry's arrival in Scotland.

The Design Process:
Based on the Diaspora communities' stories, and with their design input, Andrew Crummy will create outline designs for the linen panels. This approach ensures an artistic consistency to the overall project although individual interpretation will be encouraged in the use of stiches and colours, to reflect local traditions.

Artistic celebrations will also be encouraged within the Diaspora community and Scotland. The aim if for a range of art forms to contribute to the project, with each set of panels being accompanied by storytelling, drama and music, providing several dimensions to the historical background.

Progress on the panels will be documented on the dedicated website, allowing communities to keep in touch and gain inspiration from each other.

2014 Celebrations:
Before they make their way to Scotland for 2014 Homecoming the completed panels will be exhibited in the Diaspora communities, with associated events and performances. This will encourage many more people to become engaged in the project, raise awareness of Scotland as a destination and further increase numbers traveling to Scotland for the Homecoming.

The arrival and assembly of the Diaspora Tapestry will form one of the Homecoming highlights of the summer. The aim is for the initial focus to be stirling in early July, then for several partner venues to get involved. They will include Queen Margaret University. The Scottish Storytelling Centre and St Mary's Cathedral, which will display the tapestry and stage a full programme of events.

In the following weeks and months the partner Scottish communities will host local exhibitions and events to celebrate their own section of the tapestry. These events will provide an opportunity for the two communities to meet and celebrate together.

Lasting Legacy:
This project will create an enduring tribute to the Scottish Diaspora. The tapestry, which is likely to measure to least 90 metres, will continue to be displayed long after Homecoming, both at home and abroad. Because it is designed in sections, it will also be flexible, and can be separated for display in different locations simultaneously.

Eventually the aim is for Diaspora Tapestry to join the Battle of Prestonpans Tapestry at a purpose-built venue in Prestonpans, but until then it will tour the UK and the countries which helped in its creation. It will continue to educate audiences and promote Scottish heritage for many years to come.

The creation process will also be recorded in books, both for adults and children, DVDs and on-line resources.